How to get to the Alhambra

All the means which exist to reach and visit the monument

We indicate all the options you have to reach the monument and show you where our Welcome Visitor Centre of the Alhambra is.

How to get to the Alhambra?

First of all, have you already bought your tickets? Keep in mind that the capacity of tickets to the monument is limited and that the time of entry to the Nasrid Palaces is fixed. If you do not have them yet, do not worry, go to our offer of tickets and guided visits to the Alhambra and choose the best option to your liking.

The Alhambra is located on the Sabika hill, so that you can look at it from many points of Granada. Being located on an incline it is possible that it depends on your physical form how to get to the monument. We recommend you to take a walk to the Alhambra from the centre, but in the following sections we tell you all the means how to reach the Alhambra.

Welcome Visitor Centre of the Alhambra

We would also like to remind you that next to the entrance to the monument you have a meeting point and customer service at your disposal. In the Welcome Visior Centre of Granavisión we will help you with your visit to the Alhambra and Granada. You can also buy here your ticket to the Alhambra or choose from our wide variety of excursions and guided visits.
In addition, we have a café, a play area for children and free WiFi.

Location of the Alhambra and the Welcome Visitor Centre

Every day from 8:30 to 14:40
Afternoons according to the schedule of the guided tours
You can contact the centre via welcome.visitor@granavision.com / +34 958 223959 or also via this website. 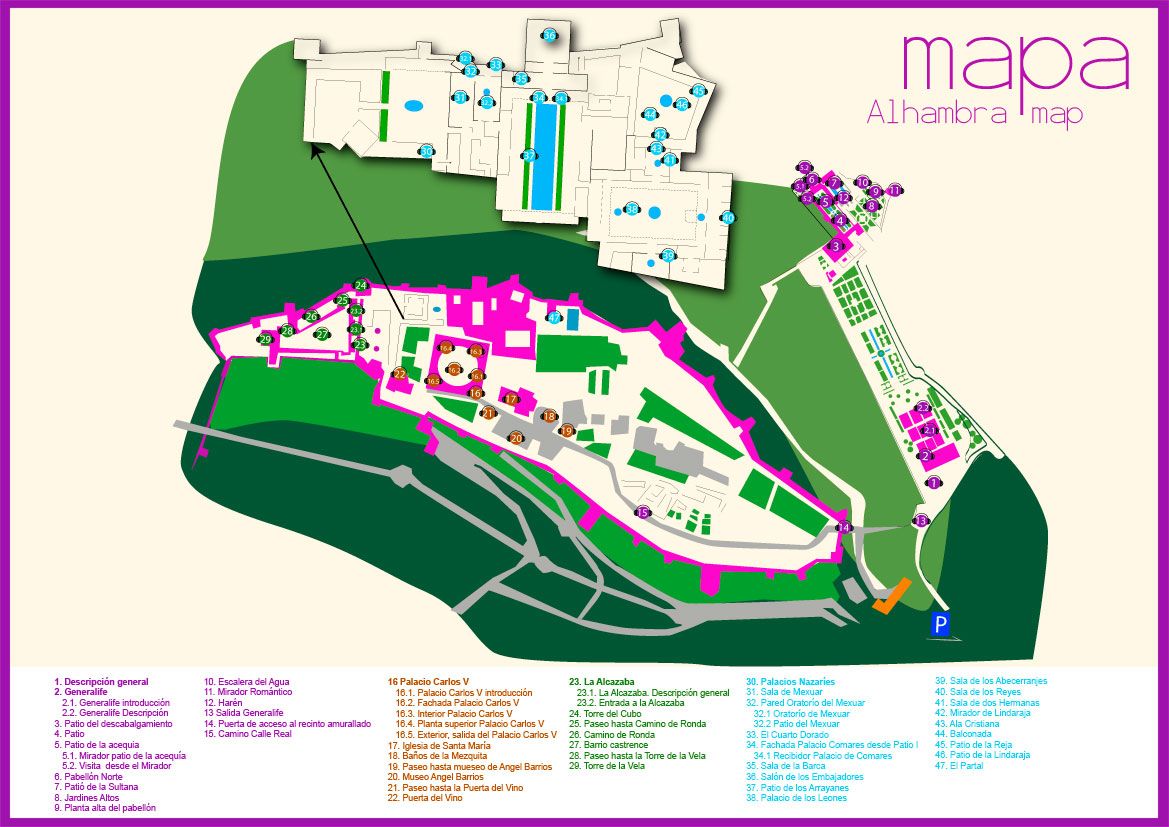 Map of the Alhambra of Granada. The most important areas of the monument are described and marked. The pink area marks the enclosure of the Alhambra and the Generalife, in brown we have the area of the Christian epoch next to the Palace of Charles V and in blue a scheme of the Nasrid Palaces.

This is the way we recommend to you. If you come walking from the centre of Granada, you can choose two ascents: the Cuesta de Gomérez from Plaza Nueva or the Cuesta del Rey Chico, right at the end of the Paseo de los Tristes.

From Plaza Nueva
Go up the Cuesta de Gomérez until you cross the Puerta de la Justicia and continue a little further up through the forest of the Alhambra.

From the Paseo de los Tristes
At the end of this walkway, passing the bridge and turning to the right appears the Cuesta del Rey Chico or popularly known in Granada as the Cuesta de los Chinos. This path winds through the forests and small creeks until you arrive near the entrace to the Alhambra.

If you prefer to arrive by bus, you have two lines which drop you off nearby:
Line C3: It goes through the center of Granada and drops you off at the entrance to the Alhambra.
Line C4: It is the line that also goes up to the cemetery and has a stop between the car park and the ticket counters.

If you prefer to come by car, the best way to access the Alhambra is from the orbital motorway (N-323 / A-44), follow it heading towards the Sierra Nevada and once we have crossed the tunnel we will turn left following the indications towards the parking of the Alhambra.

IMPORTANT INFORMATION:
The access to the Alhambra by car from the centre is forbidden. In addition, the rest of the centre only allows residents to access. If you come from outside of Granada and have arrived by car at your hotel in the centre, consult your hotel to avoid possible fines.

The visiting hours to the monument throughout the year, including holidays, so you can choose the time that suits you best.

Tips, rules and prohibitions that could be of good use before visiting the Alhambra of Granada.

Photos of the Alhambra

A few examples of what awaits you on your visit to the Alhambra of Granada. And if you are still not convinced, these photos will convince you.